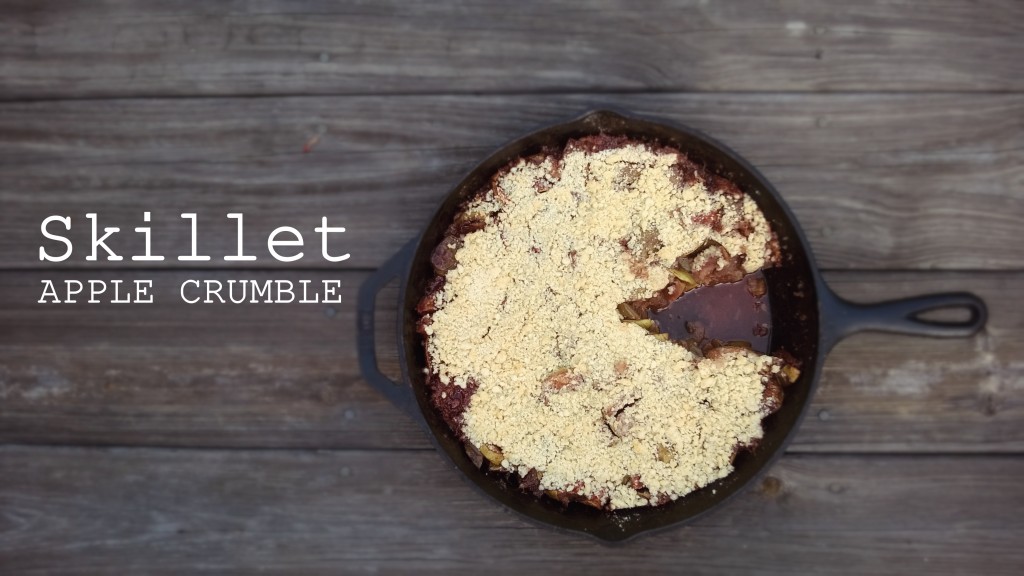 It’s that time of year again: When rain-showers are scarce and A/C usage is prevalent and sunburns are cried over.

Fortunately, in Tennessee, we get the advantage of cooler <90-degree weather until July; though I do wish pools would open two weeks before Memorial day. Nevermind because in addition to the approach of the Summer Solstice comes the first dropping of emerald fist-sized spheres of tartness in our backyard.

Every June these apples glitter under a tree sagging with precious weight of Summer Happiness! Hubs and I have the unusual blessing of collecting these jewels (unusual because not everyone has an ancient apple tree in their backyard) and eating them to our hearts’ content. Usually we share them because, as you will notice on my instagram feed and even now, our tree produces quite a few apples! I apologize in advance (not really!) for the plethora of apple recipes that will bombard your Email Inbox, Facebook and/or Instagram Feed. :) Just today I bet I picked 5-8 pounds of apples. And the other day 3-5 more pounds! (I’d like to get an actual scale to figure this lot so that I can keep track of how many pounds/yr our tree is producing.) This is the third year Cobalt and I will are honored with collecting these apples off the ground and branches, sorting through the good, the bad and the ugly, cutting and/or peeling them, cooking them in pies, applesauce, cakes, muffins and distributing them to friends. However, this is the first we’ve been here at the beginning of the season (super exciting!)! Two years ago we were getting married and honeymooning in East Tennessee; and last year we were road-tripping across the country to the West Coast. Apparently the beginning of the season starts with little bitty ping-pong ball sized apples falling off first. These ones are cute but they sure aren’t as tasty as the tennis-ball sized ones that fall later. They’re much tarter and harder to pick through (I didn’t even bother peeling them whilst making this recipe below). Usually I’ll give ‘em a wash and then chop them up, composting the bruised parts.
Today I decided to make Apple Crumble with the 15 cups of chopped apples that resulted from the day’s harvest: 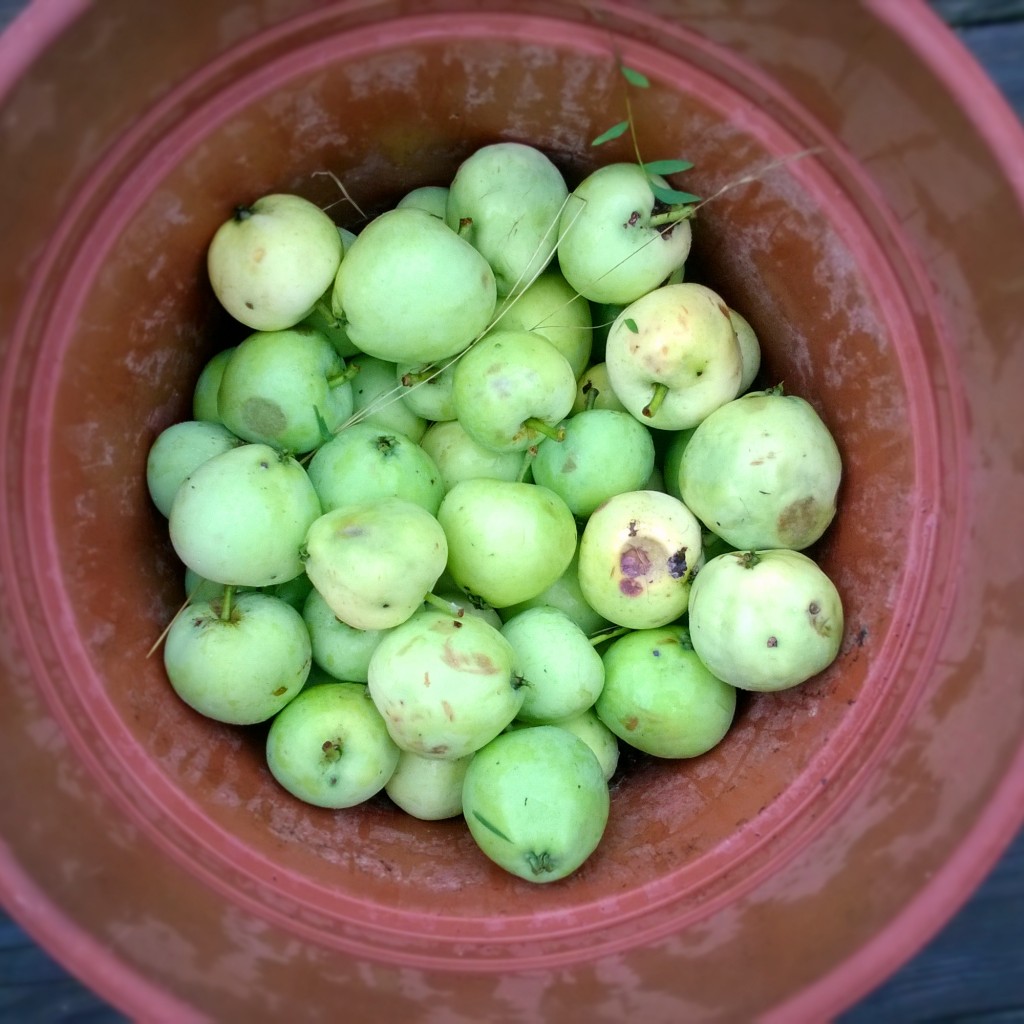 To a bowl of 15 cups of chopped apples I added 1/2 cup of brown sugar, 1 TBS cinnamon, 1 tsp allspice, 1/2 tsp ginger, 2 tsp vanilla extract and a pinch of salt. I let the bowl sit for about 10 minutes to let the juices and flavors merry. 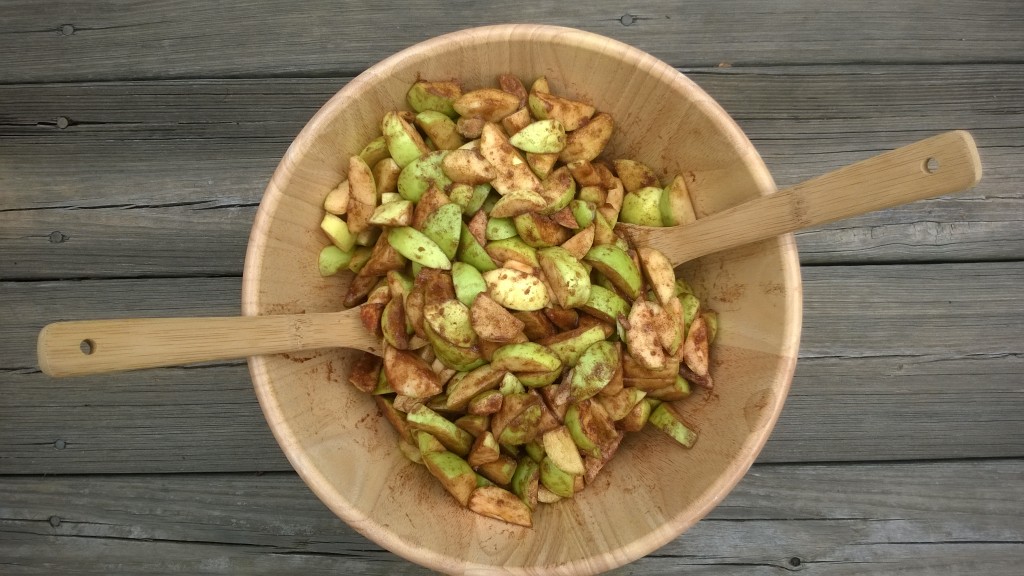 Then I lightly oiled a cast iron skillet with a paper towel dipped in oil and poured the apples into it. In a 350°F oven I let the apples bake for 30 minutes, monitoring them every 15 minutes or so. After 20 minutes I realized the apples were drying out somewhat around the edges (which I didn’t want), so I covered the pan with aluminum foil. 10 minutes later that didn’t seem to help much (as I had covered it just a little too late); so I conjured up the idea to add fruit juice. Most recipes I’ve read before say add Apple Juice to baking apples but I didn’t have that; so I resolved to pour about 1/4 cup of black cherry wine (we still have several bottles from our wedding that a friend made for us :) ) into the skillet. The idea complemented nicely! Finally, I decided to make the crumble (which really should have been made and baked at the beginning with the apples to hold in the moisture — oh well): 2 cups flour, 1/2 stick butter melted and 1/2 cup sugar. With my hands I crumbled the mixture, tasting it to determine its flavors. This I sprinkled over the hot apples, spreading it out to the edges. I let it bake for another 15 minutes until the content bubbled around the edges of the skillet. Here was the result! Very tasty, indeed. Though next time I’ll just follow my intuition and omit a bit of brown sugar in the apples and add the wine and crumble at the beginning. 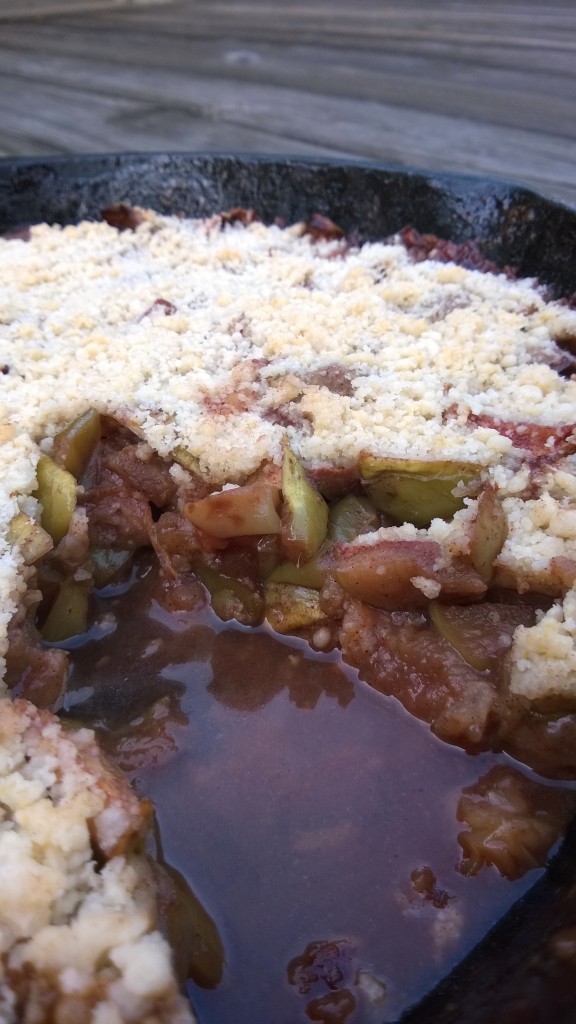 * Updated: I made this again, peeling the apples, tossing it with sugar and spices, pouring half of it into the skillet (or pan) adding half the crumble, pouring in the rest of the apples and topping off with the rest of the  crumble. Baked for 30 minutes on 350F. The layering of apples and crumble was amazing!