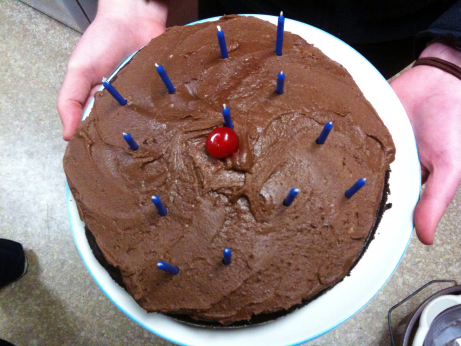 Is it just me or have you noticed that it’s a fad to eat “gluten-free?” It’s becoming so popular that it’s even marketed as healthy. (As if eating fruits and vegetables and whole grains and lean meats isn’t healthy?) I believe that this popularity has unfortunately caused the price of gluten-free products to soar. Poor people who actually HAVE celiac disease and other GI issues. Dear Celiac-stricken people: I pray this fad will go away quickly so you can afford the food you have to eat!

I wonder why it’s becoming a big deal to eat gluten free, yet people don’t even know what gluten is?

Just to spell it out: Gluten is the protein found in wheat, barley and rye (these are grains). If you didn’t know wheat had protein in it, I didn’t either until a couple of years ago! Some examples of foods that have gluten in them are flours, pizza (crust), pasta, breads, etc. Naturally gluten free foods are fruits and vegetables, nuts, seeds, fruit and corn.

Celiac disease is basically an intolerance to even the tiniest consumption of gluten. And it’s rather common in America, diagnosed or not. The organ that hates gluten the most is the small intestine (responsible for absorbing most of the nutrients in the human body). The small intestine is lined with tiny hairlike projections called villi which pull nutrients into them and futhermore into the blood stream. But in some people, gluten is like a foreign substance to these villi. So like an animal playing dead when threatened by a predator, the villi lay flat in the presence of gluten. Over time, this damages the small intestine so it can’t absorb nutrients nearly as well as it could if gluten were not present in the first place. Thus, this prevents future nutrients from being properly absorbed in their bodies to give them the energy and functionality they need day by day.

A couple good links for learning about celiac are from the Mayo Clinic.

Click here and here to view the pages I used to gather key information.

Pardon me while I briefly step on my soap box and share with you my thoughts for the origins of this fad, which may or may not be accurate but they are opinions after all. If you have any thoughts, too you’re welcome to share them, even if you disagree with me. I’d love to hear anything you have to say! :)

#1. Generally speaking, America is becoming more “health conscious.” And what I mean by this is freakishly health conscious! Raw food diets, paleo diets, detoxing, and now gluten-free foods are a “thing”. I guess I’m not super supportive of these diets…not that I’m against them per say! I just think they’re too much trouble and cost too much money for me. And they’re not a lifestyle. However, I understand that people have their own convictions. And that some people can actually afford these diets (I suppose if I could, I might try them out…).

#2. I’ve also been hearing that wheat now-a-days has a lot more gluten in it than it used to. (I’m not surprised since genetically modified plants are dominating farming right now. But another post on this at a later time.) Thus, the high concentration of gluten in breads and such are possibly contributing to celiac-like symptoms; and people are buying gluten-free things to help themselves feel better. I don’t actually have a source for this information, though, so don’t quote me on it. And the reaction to go gluten free might be psychological. Perhaps there is another health-related issue that is causing stomach cramps and nutrition deficiencies?

Well, whatever the case, I suppose I am genuinely thankful that gluten-free cake mixes exist because that’s what I needed for this recipe. My grandmother tries not to eat gluten to avoid aggravating her eczema. So for her birthday this year I decided to make her a gluten free cake. If you’re wondering, I found the Betty Crocker mix at Bi-Lo in the baking aisle for about $5, but it’s about fifty cents less at Walmart. If I’d had the time and ingredients, I would have loved to make it by scratch!

I bet you’re wondering – what could replace wheat flour in cake? Well, here’s your answer, found right on the side of the cake mix box: rice flour, soy flour, potato starch and tapioca starch.

I am actually pretty impressed with the simplicity of the ingredients in this mix compared to regular cake mixes. The only other ingredients were sugar, cocoa and leavening (i.e. baking soda etc.). No high fructose corn syrups, no corn starch, no added coloring. Makes me want to buy gluten-free cake mixes more often. If only they weren’t so expensive! *says to self :* “this fad will pass, this fad will pass!”

…So, to the recipe you’ve all been waiting for!

P.S. This cake is SUPER easy to make. I was in a rush, so it wasn’t as pretty as I wanted it to be (I wanted to pipe on the icing) but it still tasted amazing!!!

I just realized that I completely forgot to get a picture of the slice on my plate! My apologies. Well, the cake was super delicious and didn’t taste gluten-free at all! Definitely worth trying again. Especially once those prices drop….haha. ;)