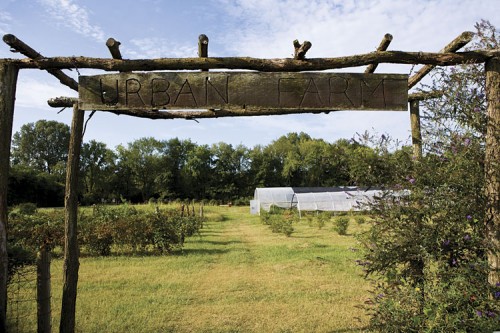 Since Cobalt (my husband) and I began imagining our garden, I’ve had an inkling to learn more. ‘Tis my dream to one day have a sustainable garden; and to establish and participate  in community gardens in my future career as a dietitian. However, instead of solely reading books and internet knowledge, I decided the best thing would be to actually volunteer at a local farm. Hence, I found and visited Crabtree Farms in Chattanooga, TN.

At the farm, I’ve learned about: seasonal crops and plant varieties, maintaining ideal growing conditions, harvesting crops, farm organization and routine…and so much more. Mostly, I’ve helped harvest and sort produce; but I’m hoping to also help in the greenhouse soon. (I would do both, but I’m trying not to overwhelm myself.)

A side note: I highly encourage being a part of farm life. This opportunity is such a blessing to me especially as I’ve discovered things God has created that I never knew about, such as: native paw paws; watching squash, zucchini and okra grow; and so much more.

Volunteering at Crabtree has not only been beneficial towards my knowledge of farming and my relationship with God; but also through contributing to my pantry. The staff willingly gives me the blemished “seconds,” which I then gratefully use for feeding Cobalt and I. Recently, I’ve brought home a LOT of squash (they’re in season)! Acorn, butternut and summer squashes. Consequently, I’ve wanted to make pureed squash soup all week; so last night, I finally accomplished this feat. It was rather time-consuming but also very rewarding! (I honestly don’t like time-consuming recipes, but occasionally I’ll take the challenge! :))

Estimated Time: 2 Hours | Makes: about 8-10 cups, depending on the size of your squashes

How I made it:
1. I placed a 5-liter pot on the stove, poured in the oil and turned the heat on medium.
2. Once oil was hot, I added the cubed butternut squash and cooked it 15-20 minutes (with the lid on) until it was a bit soft.

3. Next, I added the onion, sweet red pepper and yellow/green squash; and cooked it (with the lid on) for another 20 minutes.

4. Then, I prepared the acorn squash as follows:

5. Meanwhile, I measured 2 cups of water into a tea kettle; and when the whistle blew, I added the water and a cube of chicken stock to the pot on stove. I stirred the soup and let it simmer (with the lid on) while waiting for the acorn squash to cook in the oven.

6. When timer buzzed, I took the acorn squash out of the oven and pressed on the skin with my finger. It was soft so I carefully (because the squash was VERY hot) spooned out the soft flesh. I added the flesh to the pot on the stove.

7. Finally, I took a 2-cup glass measuring cup and scooped out enough soup to fill my blender (the rest I left in the pot). I “pureed” it for about 20 seconds and returned the soup back to the pot.

8. To serve, I spooned the soup into a bowl and sprinkled some cayenne pepper and basil leaves on the top.

Some people like to add milk or cream to this type of soup. You also may do so if you like :)

I served the soup with some homemade biscuits.